Lewis Hamilton has taken pole position for the 2018 Formula 1 Belgian Grand Prix in a rain-affected qualifying session ahead of title-rival Sebastian Vettel while Force India locked out the second row.

Hamilton now holds the record with five poles at the Spa circuit and continues Mercedes qualifying dominance at the circuit.

Hamilton had not looked like the favourite for pole with Kimi Raikkonen and Vettel going fastest in Q1 and Q2 respectively but the Mercedes driver pulled three seconds out of Vettel’s time as the rain stopped in the final minutes of the session and the German ended up seven tenths behind.

Esteban Ocon and Sergio Perez will start in third and fourth in the debut race for the Racing Point Force India team, although the pair had looked to have lost out earlier in Q3 when the team did not pull them in for intermediate tyres at the same time as the rest of the top 10. 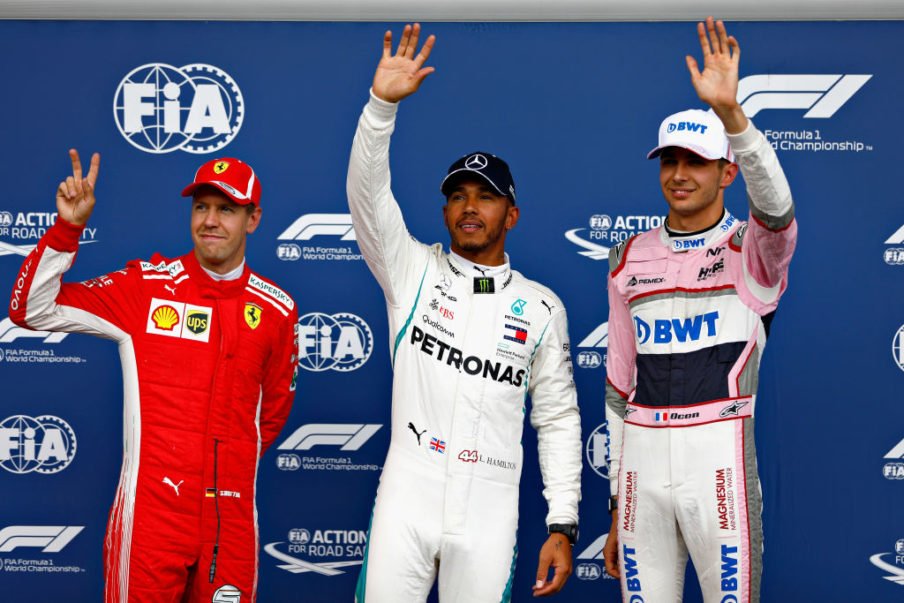 However as the track began to dry and lap times tumble such disadvantages were negated and it was in fact Red Bull, who had initially looked to have made the best strategy call after Max Verstappen had enjoyed a spell at the top of the timings board, who ended the session in seventh and eighth.

Romain Grosjean qualified in fifth with the Haas team showing much better pace than they had in the practice sessions and Raikkonen in sixth after the Finn was forced to end his qualifying attempt early.

Kevin Magnussen finished the session in ninth with Valtteri Bottas in tenth after only setting an outlap in the knowledge that he will start at the back of the grid with an engine penalty.

The Toro Rosso pair of Pierre Gasly and Brendon Hartley finished just outside of the top 10, with Hartley spinning on his final lap and bringing out a yellow flag.

Charles Leclerc and Marcus Ericsson ended up in 13th and 14th, making it the Swede’s fourth consecutive Q2 appearance for the first time in his F1 career.

Nico Hulkenberg in classified in 15th although the German did not set a time in Q2 and will start with Bottas at the back of the grid after an engine change.

The surprise Q1 elimination was Carlos Sainz who was pipped for 15th by Marcus Ericsson in the dying seconds of the session.

Fernando Alonso qualified in 17th, ahead of the Williams pair of Sergey Sirotkin and Lance Stroll in 18th and 19th.