Heavy rain prior to and during the opening stages of FP1 meant that the entirety of the 90-minute session was spent on wet and intermediate compound tyres, with the fastest times arriving in the final moments as a dry line started to emerge.

As was the case during last weekend’s Belgian Grand Prix qualifying, the Force India pair was on track at the end of the session to take advantage of the best track conditions.

Perez’s 1m34.000s was set with the final lap of the session, eclipsing Ferrari’s Kimi Raikkonen by 0.550s and demoting the Finn to second place.

Perez’s team-mate Esteban Ocon posted his session-best effort after Raikkonen but was unable to beat the Ferrari. Ocon ended FP1 in third.

Completing 28 laps in the session – the most of any driver in the field – Raikkonen was the only Ferrari on track for the majority of the morning, as team-mate Sebastian Vettel was stranded in the garage with a gearbox issue.

The team stripped the rear of Vettel’s car and fitted a new gearbox. He was the only driver to not use the intermediate tyre in the session, only managing four laps on the wet compound before the issue struck.

Brendon Hartley had led the timesheet in the final 10 minutes of running before slipping to an eventual fourth place.

Daniel Ricciardo’s newly installed ‘Spec-3′ Renault power unit survived an early scare when the Aussie slowed to stop in the middle sector on his first lap. He crawled back to the pits in safe mode and the team diagnosed an electrical glitch.

Ricciardo returned to the track, losing only 20 minutes of track time and finished fifth ahead of the Red Bull-bound Pierre Gasly.

Escaping a half-spin at Parabollica which he described as “just a little drift,” Max Verstappen was seventh on the timesheet beating the Renault pair of Carlos Sainz Jr and Nico Hulkenberg.

Mercedes’ Valtteri Bottas and championship leader Lewis Hamilton were 10th and 11th, electing not to run at the end of the session and therefore missing out on posting times when the circuit was at its fastest.

Vettel not a fan of ‘lottery’ standing restarts

Gasly ‘lost for words’ after maiden F1 victory at Monza 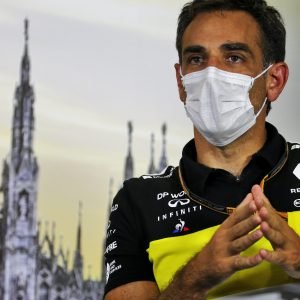 Renault: Red Bull ‘missed a trick’ not building its own engine