Charles Leclerc led a Ferrari one-two at the top of the timesheet in FP2 ahead of the Canadian Grand Prix, while FP1 pacesetter Lewis Hamilton hit the wall.

Formula 1 championship leader Hamilton lost an hour of the 90-minute session after he suffered a snap of oversteer as he dropped off of the Turn 9 sausage kerb. Sliding wide he clouted the outside wall with his right rear tyre.

Hamilton recovered his car to the pitlane, but with significant suspension damage he was unable to return to the track, ending the session in sixth place having not completed a qualifying simulation run.

His Mercedes team-mate Valtteri Bottas could only manage third on the timesheet behind the Ferrari pairing.

Sebastian Vettel had topped the timesheet after his first lap on the soft tyres, eclipsing Bottas’ benchmark by 0.060s. Leclerc slotted into third place, 0.112s behind his pacesetting team-mate.

However, on his second timed effort Leclerc improved to a 1m12.177s to beat Vettel and clinch top spot.

Red Bull’s Max Verstappen did manage to eclipse Leclerc’s best time in sector one, but lost 0.3s in the middle sector.

Verstappen’s qualifying simulation would further unravel when he skimmed the Wall of Champions after picking up understeer through the final chicane in the turbulent air of his team-mate Pierre Gasly.

Verstappen ended up 13th on the timesheet, with Gasly failing to break into the top 10 despite recording a run on the soft tyre finishing in 12th.

Both Sergio Perez and Lance Stroll ended the day in the top 10 for Racing Point, with Perez in seventh and Stroll in 10th. They sandwiched the Renault duo on the timesheet.

Stroll made light wheel-to-wheel contact with Romain Grosjean, after squeezing the Haas driver to the outside of the track on the entrance to the final chicane. Both drivers avoided damage.

Alfa Romeo’s Antonio Giovinazzi, who struck the Turn 9 wall after spinning in FP1, lost nearly an hour at the start of the session as his car was repaired. He ended the day in 18th having not run on the soft tyre. 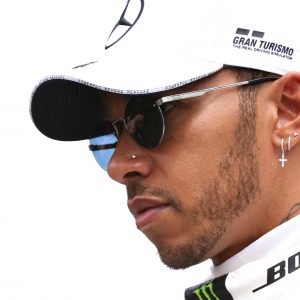