Arguably the most famous street race in America, the Long Beach Grand Prix is a favourite amongst fans and drivers alike. The scenery, the vibe and the on-track action is second to none when it comes to an event, let alone a race weekend.

IndyCar returned for the 34th consecutive year to Shoreline Drive and once again the drivers delivered. Alexander Rossi, Josef Newgarden, Graham Rahal. and Will Power was the sharp end of the grid, most the weekend. Rossi was the leader throughout all of practice, qualifying and even morning warm-ups.

The race got out to a controversial start as entering turn 1 on lap 1, Graham Rahal got into the back of Simon Paganaud. The contact spun the Frenchman into the wall breaking some rear suspension parts. Pagenaud said afterwards that if they were able to get him to the pit sooner, they may have been able to get him back into the race. Unfortunately, it ended his day before it ever really began. Rossi was a man on a mission, jumping out to a commanding lead. Much of the action taking place in the midfield.

Sebastian Bourdais, on a restart, pulled a move only seen in video games by passing three cars in one shot all while entering a 90-degree turn 1. Twitter immediately exploded with calls for “Overtake of the Year”.

To much of the disdain of fans, race control called the pass illegal due to Bourdais crossing over the “blue line” that is pit exit lane. Bourdais dropped back two seconds to allow Scott Dixon to pass. Sebastian then proceeded to pass Dixon the very next lap in the same exact place to rightfully claim P3. Later on, though, Bourdais got mixed up in a round of bumper cars in turn 11. He ended up finishing P14.

Rookie Robert Wickens was brought back to reality as he and his Schmidt Peterson Motorsports entry struggled with gear box issues most of the day. Wickens ended his race in P22, 12 laps down.

The class of the field was Alexander Rossi in his NAPA Auto Parts Andretti Autosport entry. Rossi was untouchable most of the race. Leading 71 of 85 laps, and the first driver to win a Long Beach Grand Prix from pole since 1999. Will Power finished P2 with Ganassi driver Ed Jones tying a career best finish of P3. 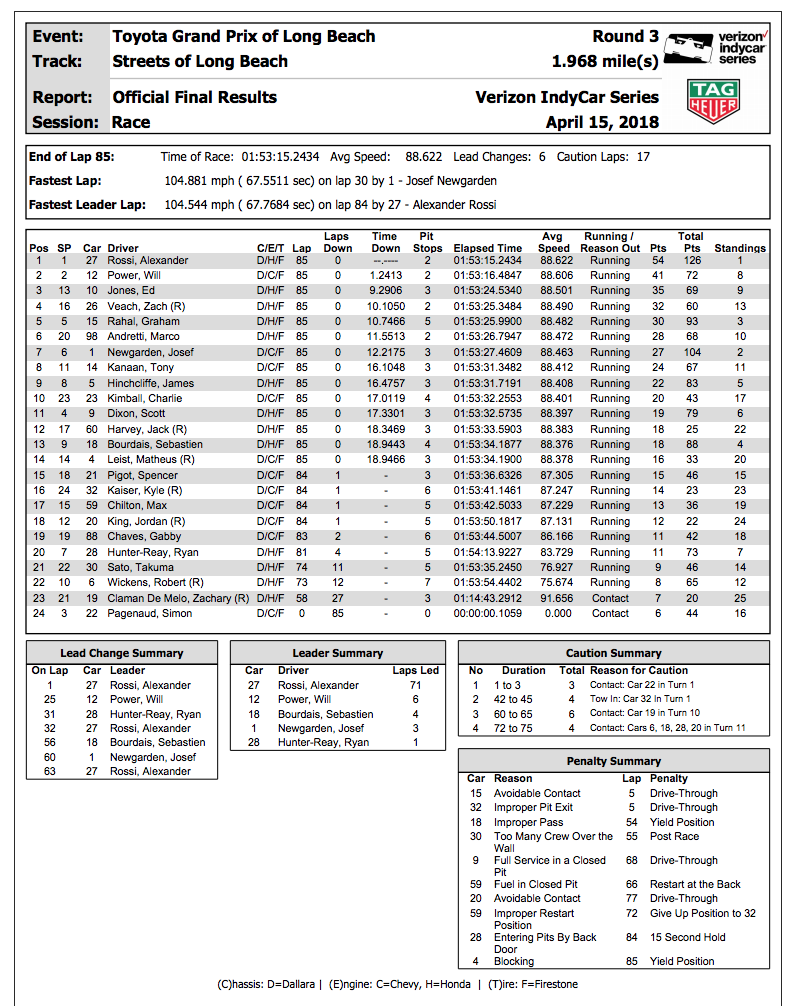